without mentioning trump, tell me why i should vote for biden.

you. have. NOTHING.
Top

Bishop is that you?

Artemis wrote: ↑
Fri Jul 17, 2020 2:21 pm
What's going on with Fox News and Cheeto?? Seems that there's been a few stories recently where Fox is challenging Trump.

I just read about this interview; it aired yesterday.

Btw this is the "test" Trump brags about acing: ...Wallace later raised Trump’s attacks on Biden’s sharpness, and when Trump trotted out his claims to acing a cognitive test, Wallace was ready. As The Post’s Philip Bump has noted, the kind of test Trump has bragged about is remarkably simple because it aims to ferret out obvious mental impairments. Wallace noted that he can attest to this, because he took a similar exam.

“It’s not the hardest test,” Wallace said. He noted that one question asked him to identify an elephant by looking at a picture of one.

Wallace shot back: “Well, one of them was count back from 100 by seven.” He began counting: “Ninety-three.”

In other circumstances, this could have come off as overly adversarial. But Wallace was putting his finger on the ridiculousness of the claim — just as he had so many times previously in the interview.
...

and biden is going to fix it?
it's here because of trump?

Premise 1: Government /leadership policies and response to a pandemic like Covid-19 have consequences, wherever they fall on the range we're seeing globally (e.g., Canada vs. Italy vs. China vs. USA), including mental health stability, economic hardship, and often avoidable deaths.
Premise 2: US policies and response have been woefully poor, willfully ignorant, and yet strangely boistorously arrogant with confidence at the same time.
Premise 3: Leadership and policies informed by science, a dash of competency, and some basic god-damned human empathy have yielded outcomes I find preferable to those in effect with the current federal administration: shorter shut-downs or lock-downs, fewer people suffering economically or in their health, greater collective unity and action, return to something more recognizably like normality, and so forth.
Premise 4: If I would like policies that more closely resemble those informing successful handlings of the current pandemic, I should then vote for someone who would enact said policies.
Premise 5: The current leadership has shit the bed on handling the pandemic in numerous ways (re-routing data, perhaps the latest instance from this week, from the CDC) and therefore I will place a vote for someone who more closely aligns with my ideals.

To troll, let's pretend we cannot understand the unstated premises and substitute them with a series that's more daft, to put it kindly:
Premise 1: Trump didn't cause the pandemic. I'm fully on board with this not-his-fault-kindergarten premise, too. Yeah! We agree.
Premise 2: Unstated: If someone isn't the originating cause of an event, action, or series of happenings, then that person isn't accountable for the consequences of what follows. Aw, now this one is pretty much straight bullshit. We've seen most Western countries tackle Covid-19, using less resources and having less technological capabilities, with better results than the US. The current administration is entirely responsible for their handling of their response to the pandemic. Own it.
Premise 3: Posed as a rhetorical question: Biden cannot fix the US's pandemic problems. Not sure what claims support this premise, but I'd be curious to know what they are and to have the chance to weigh their validity and the extent to which they actually support the idea Biden leadership and policies could not yield better results.
Premise 4: Unstated: Since changing leadership and policies would not yield any preferable change in outcomes, we might as well stick with the one who brought us here.

tvrec wrote: ↑
Tue Jul 21, 2020 7:13 pm
Premise 2: Unstated: If someone isn't the originating cause of an event, action, or series of happenings, then that person isn't accountable for the consequences of what follows. Aw, now this one is pretty much straight bullshit. We've seen most Western countries tackle Covid-19, using less resources and having less technological capabilities, with better results than the US. The current administration is entirely responsible for their handling of their response to the pandemic. Own it.

"A report out of Beijing suggests the first confirmed case of the coronavirus can be traced back to mid-November."

January 3: Trump learns about COVID-19 from intelligence reports (coincidentally the same day Solemani was killed, which pissed off the left because he did it behind their backs)
January 28: Trump receives an intelligence briefing around the virus, is told it was spreading outside of China, and that China is withholding information.
January 31: Travel from China is restricted
February 4: SOTU Address “Protecting Americans’ health also means fighting infectious diseases. We are coordinating with the Chinese government and working closely together on the coronavirus outbreak in China. My administration will take all necessary steps to safeguard our citizens from this threat.” ~Nancy tore it up~
March 9: Stocks markets plunge in worst single-day fall in more than a decade.
March 26: US death count is now over 1,100.
March 27: $2 trillion stimulus package signed into law

ventilators were everywhere, and we saw a million tiktok videos of nurses dancing. hospitals were half full nationwide. an unused 'hospital ship' was brought in for NY in March, yet the Gov/Mayor kept the nursing homes full. boosting numbers. any death that happens for any reason is recorded as covid. if you truly think we had:
-impeachment
-a global pandemic
-economy crash
-mass unemployment/lockdowns, and
-race wars
all randomly within a 6 month span, and it has nothing to do with trump’s re-election then you don’t know how the world works. these democrats are insane with anger because trump is calling them out on their bullshit. same with mainstream media. an outsider won in 2016 and that wasn't supposed to happen.

Only 56 Million Cases to go until we reach H1N1 (Swine Flu) Cases from 2009! How long were schools shut down for? What type of masks were popular back then?

based on this shit ALONE i'd never vote for him. nevermind the dementia, corruption, incompetence..

and by the way, if the racism thing is your thing..

Only 56 Million Cases to go until we reach H1N1 (Swine Flu) Cases from 2009! How long were schools shut down for? What type of masks were popular back then?

"The US Centre for Disease and Control Prevention (CDC) estimated that 150,000 to 575,000 people died from (H1N1) pandemic virus infection in the first year of the outbreak."

that's what i found. whatever. the point is *because it's trump*, this virus, with a 98% survival rate, has been *blown the fuck up*. obama (the most corrupt president of all time) got a pass on everything.

if trump wins this will start to go vertical
if biden wins it'll die off
it has nothing to do with medicine
and that's insane
these people put their hatred for trump over their country and we're paying for it, hard. 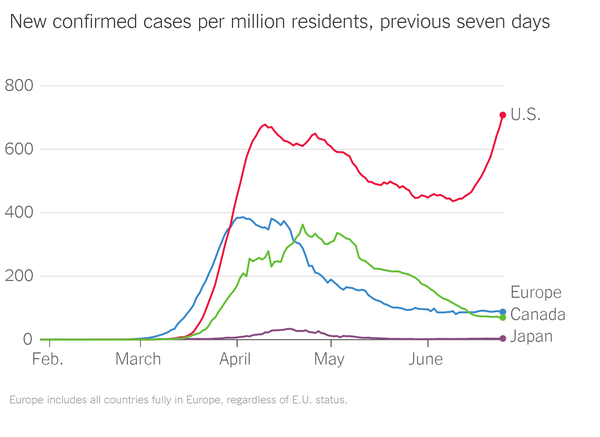 Those are world wide numbers...

The case and death rates are not growing exponentially in the United States because people don't like Trump.

I don't know what "passes" you think Obama got in the 8 years he was President. As I recall the complaints were neverending. Unless you are referring to the fact that he wasn't impeached or that no one from his administration was sent to jail. But hey, whatever. You said your main point was on Trump and the virus.

The United States will get moving in the right direction because we will start to follow a consistent, unified plan of action as a country

And that right there, my friend, is the difference between Trump and Biden. Trump does not think Covid-19 has anything to do with medicine. Trump does not understand that more tests do not cause more people to become hospitalized and/or die. He does not understand why testing, contact tracing, and isolation go hand in hand and are necessary to not only curb the spread, but also slow it down so medical facilities and personnel are not overwhelmed. He called Covid-19 a hoax at a campaign rally in NC. He said, and continues to say it is like a flu. He said last week most people will just get the sniffles. He does not want to heed the advice of the medical experts that surround him: wear a mask, socially distance, avoid large gatherings. These things should have been done at a national level back in March. People travel, cross state lines. We still have Governors that won't issue state mandates to follow the CDC guidelines. Yes, that it Trump's fault because he is willfully undermining the CDC by not leading by example, by not taking it seriously, by not telling all states/governors to get on the same page, by allowing governors to undermine the authority of the mayors in their states who try to enforce CDC guidelines, and by politicizing the wearing of masks.

Trump stood at the podium yesterday, July 21, 2020 and said maybe masks might be a good idea. You think. He also said it is going to get worse before it gets better. Really. He thinks he is going to have his convention in Florida in 6 weeks. Maybe he should consider telling the Governor DeSantis to close fucking Disney World since the surge in cases and hospitalizations is off the charts.

So no, Trump did not cause the virus. He restricted travel from China Jan 31st. And then he did NOTHING in February. NOTHING. Except whine that the virus came from China and he briefly imposed travel restrictions with exceptions.

The United States will get moving in the right direction because we will start to follow a consistent, unified plan of action as a country

And that right there, my friend, is the difference between Trump and Biden. Trump does not think Covid-19 has anything to do with medicine. <snip>

you missed the point

it's all politics
and that's insane.

as far as 'covid' itself, it's a flu strain with a 98% survival rate. THE NUMBERS they broadcast is what everyone bases their fear level on.

and by the way we DID go to the moon, and the earth is round.

You've missed the point. I give up. Read something other than that Q-Anon crap.
And Covid-19 isn't a flu strain, but please go wander into the crowds without a mask.
Top

i don't need to read my opinions. i am a robot, i formulate them. so go ahead.. you go give up.

i really don't know
if an asteroid hit us and 100m die is that trump's fault too?
Top