One shitcanning I have no problem with. Bolton was a warmonger, given time he probably would have gotten us into war with Switzerland.
Top

Ah man, cheap chocolate and Ricola? Why would you be against that?!
Top

Agreed, this is the best news to date coming out of the whole trump disaster.
Top

WASHINGTON — Kurt Volker, a former U.S. ambassador to NATO caught in the middle of a whistleblower complaint over the President Donald Trump’s dealings with Ukraine, resigned Friday from his post as special envoy to the Eastern European nation, according to a U.S. official.

The official said Volker told Secretary of State Mike Pompeo on Friday of his decision to leave the job, following disclosures that he had connected Trump’s personal lawyer Rudy Giuliani with Ukrainian officials to investigate former Vice President Joe Biden and his family over allegedly corrupt business dealings.

Giuliani has said he was in frequent contact with Volker about his efforts. The State Department had no immediate comment on his resignation and has said only that Volker put Giuliani in touch with an aide to Ukraine’s president.

Pompeo said Thursday that as far as he knew, all State Department employees had acted appropriately in dealing with Ukraine.

Volker was brought into the Trump administration by former Secretary of State Rex Tillerson to serve as envoy for Ukraine. He worked in a volunteer capacity and had retained his job as head of the John McCain Institute for International Leadership at Arizona State University. Arizona State’s student newspaper was the first to report his resignation. 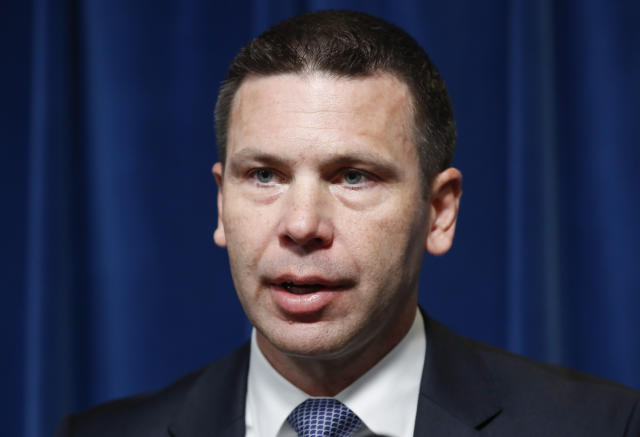 McAleenan told The Associated Press he was leaving on his own terms — a contrast to other top administration officials pushed out during Trump's tenure. But his departure ends an awkward period of leadership — one in which McAleenan delighted Trump by getting border crossing numbers to fall yet remained an outsider in an administration where top figures — including in his own department — were brash Trump supporters popular on conservative media.

A White House official with knowledge of the decision confirmed that it was McAleenan's decision. The official wasn't authorized to speak publicly and spoke to AP on condition of anonymity. Trump tweeted that McAleenan was leaving to spend more time with his family and go to the private sector.

No replacement was yet named at the department, which has seen its ranks decimated through firings and resignations. The acting DHS deputy secretary is the head of the Transportation Security Administration.

And it creates yet another top-level vacancy in Trump's Cabinet — at the department responsible not only for immigration enforcement but also for helping states secure elections.

I think Jim Jordan's day has finally come, but who knows.

A professional referee says in a lawsuit filed Thursday that disgraced doctor Richard Strauss masturbated in front of him in a shower after a wrestling match at Ohio State University, and that he reported the encounter directly to Rep. Jim Jordan, R-Ohio, who was then the assistant coach.

“Yeah, that’s Strauss,” Jordan and then-head coach Russ Hellickson replied, according to the lawsuit, when the referee, identified in court papers as John Doe 42, told them about the incident. The lawsuit, filed in federal court in Ohio, implies that Jordan's response to the incident, which the referee said happened in 1994, was essentially a shrug.

John Doe 42 is the second person to say he told Jordan directly about either being approached or molested by Strauss, who was found by independent investigators to have sexually abused 177 male students over two decades.

Jordan, a powerful Republican congressman and a top defender of President Donald Trump in the ongoing impeachment inquiry, has repeatedly denied knowing anything about what Strauss did to the wrestlers he helped coach from 1986 to 1994. He has said the allegations against him were politically motivated.

John Doe 42 said that when he informed Jordan and Hellickson about what happened, their response was, “Yeah, yeah, we know.”

Former Ohio State wrestler Dunyasha Yetts was the first person to say he spoke to Jordan directly about Strauss. He previously described how he went to see Strauss for a thumb injury, and when the doctor tried to pull down his pants, he stormed out and complained to Jordan and Hellickson.

“It’s good that people are starting to come forward and say the truth, which is that Jordan and the other coaches knew what was going on and they blew it off,” Yetts told NBC News.

Mick Mulvaney has been replaced with Mark Meadows.

Kellyanne Conway to leave the White House at the end of the month, citing the need to focus on her family

Secretary of Defense Mark Esper has drafted a resignation later because he expects to be fired by President Donald Trump sometime after the election, three separate Defense Department sources told NBC News exclusively on Thursday afternoon.

According to reporting by NBC’s Courtney Kube and Carol E. Lee:

Esper prepared his letter because he is one of the Cabinet officials long expected to be pushed out after the election.

As his tenure may be coming to an end, Esper is helping members of Congress draft legislation that will strip names of Confederate leaders from military bases in a move that could put him further at odds with President Donald Trump.

This singular issue has distended into an irreparable schism between Esper and Trump:

Esper is also thinking about his legacy, said the two officials. He earned the nickname ‘Yesper’ from lawmakers and White House officials for, in their view, his willingness to implement Trump’s agenda without pushing back. ‘He cares about his legacy and prefers to be remembered as someone who was fired because he stood up to the president, rather than being remembered as Yesper,’ one defense official said.

The White House refused to comment on “personnel matters or speculate on potential changes within the administration,” NBC’s report said.

Trump has long-defended the legacies of Confederate military leaders, who led Southern troops in an insurrection over slavery against the North, leading to the American Civil War. At least 600,000 Americans died in the conflict.

This firing worried me. I don't think it bodes well when the guy who opposed using US troops on US soil,Esper, gets fired right after Cheeto lost the election and just as he's ramping up his bid to retain power.
Top

I see Trump building reinforcements for a bargaining chip.
Dems love the autocrat/dictator/not leaving story--------he is going to leverage that for every ounce he can get.

The more Dems push the autocrat story, the more powerful the bargaining chip.

He is going to request an audit on the voting software, Dominion.
Dominion machines were used in most all the swing states.
Based in Toronto!

There have been problems with tabulations in the past, not necessarily because of illicit human intervention. But problems none the less.

Ontario was the first Canadian province to use Dominion's tabulator machines in the 2006 elections.[13] New Brunswick used Dominion's 763 tabulator machines in the 2014 provincial elections.[14] There were some problems with the reporting of tabulator counts after the election, and at 10:45 p.m Elections New Brunswick officially suspended the results reporting count with 17 ridings still undeclared.[15] The Progressive Conservatives and the People's Alliance of New Brunswick called for a hand count of all ballots. Recounts were held in 7 of 49 ridings and the results were upheld with variations of no more than 1 vote per candidate per riding.[16] This delay in results reporting was caused by an off-the-shelf software application unrelated to Dominion.[17]

In June 2018, Elections Ontario used Dominion's tabulator machines for the provincial election and deployed them at 50 percent of polling stations.[18][19]

Going to Supreme Court?? That's were Trump and Repubs are trying to go with this, as far as I see.
Important that he gets the public audit though. And as much attention as possible. More weird shit from Trump to get attention for this I imagine.

Dems will have no room to refuse an audit to prove there was a fair election, because otherwise........ he WILL NOT LEAVE!

I'm not saying for a second that Dominion was hacked.

I think Trump and Repubs think it was hacked. Who knows it if it was or not. It's not likely, but also not impossible.

Just where I could see it going.

Artemis wrote: ↑
Mon Nov 09, 2020 3:24 pm
This firing worried me. I don't think it bodes well when the guy who opposed using US troops on US soil,Esper, gets fired right after Cheeto lost the election and just as he's ramping up his bid to retain power.

As always, he is putting his ego before the best interest of the country.

“At the end of the day, it’s as I said — you’ve got to pick your fights,” he added. “I could have a fight over anything, and I could make it a big fight, and I could live with that —why? Who’s going to come in behind me? It’s going to be a real ‘yes man.’ And then God help us.”

National security experts and some lawmakers have warned about the dangers of having a rudderless Pentagon during the presidential transition period if U.S. adversaries such as Russia and China try to cause trouble.

In addition to speculation about Esper, questions have also swirled about the fate of other national security leaders, including FBI Director Christopher Wray and CIA Director Gina Haspel.

“The disarray of the lame duck Trump White House, especially in the national security space, could be staggering. And our adversaries may try to take advantage,” Sen. Chris Murphy (D-Conn.) tweeted Sunday.

“Like I said yesterday. Trump is creating a dangerously unstable national security environment during this transition period. Adversaries are watching,” Murphy added in a tweet Monday after Trump fired Esper.

Questions are also being raised about whether Miller’s appointment violates the law requiring a seven-year period between retiring from active military duty and becoming Defense secretary. Miller retired from the Army in 2014. In 2017, Congress approved a waiver to allow Mattis, who retired from active duty in 2013, to be Pentagon chief.

A Senate Armed Services Committee aide said the panel does not believe the cooling-off period applies to an acting secretary, though they added the "final determination" lies with the Justice Department.
...
The firing also means Trump is ending his tenure with his fourth acting Defense secretary in less than two years.
...