Oh....I was all into taking pants off and wearing the pajama pants at home since last August when I broke my leg.

At least I wear boxer briefs, so like short shorts.....

Oh....I was all into taking pants off and wearing the pajama pants at home since last August when I broke my leg.

At least I wear boxer briefs, so like short shorts.....

I haven't worn pants, shoes, or a shirt in the last 6 weeks
Top

I've been cutting my own hair for over a decade, so I'm ahead of the game there.
Top

Yeh I bought some clippers 3 weeks ago. I was surprised how easy it was to do your own hair.
Top

You know the times up and time to go to bed when you skim the headlines and find this to be the intriguing one......

Commissioner Resigns After He Threw a Cat During Zoom Meeting 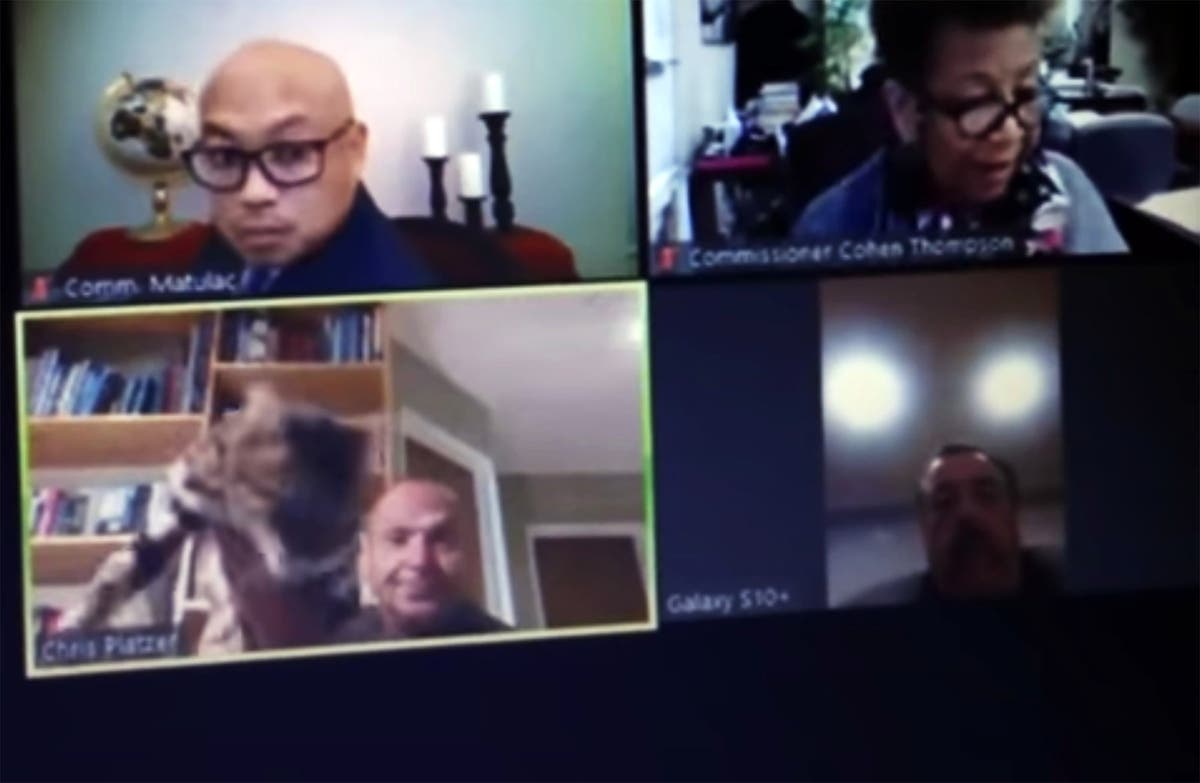 “OK, first, I’d like to introduce my cat,” said a planning commissioner in Vallejo, Calif., lifting it close to the camera and then, with two hands, tossing it off screen.

Chris Platzer, a planning commissioner in Vallejo, Calif., at lower left, threw his cat off screen during a videoconference last week.


The city Planning Commission meeting in Vallejo, Calif., last week followed the same humdrum pattern of so many municipal meetings: There was the Pledge of Allegiance and a roll call, followed by various reports.

The commission, like many other businesses and government agencies observing social distancing and stay-at-home rules during the coronavirus pandemic, met on April 20 via a Zoom videoconference.

That posed the usual challenges: Commissioners with microphones muted when they were trying to be heard, some of them appearing half offscreen at times or talking over one another.

But things took an unexpected turn about two hours and 24 minutes into the session after one of the commissioners, Chris Platzer, was asked if he had any comments after reviewing a project application.

“Yes, if I’m allowed to make them,” he said, just after a cat could be heard loudly meowing offscreen, according to a video of the meeting.


“Yes, this is the section where you can, Commissioner Platzer,” the commission’s chairman said.

The cat meowed loudly again. “OK, first, I’d like to introduce my cat,” Mr. Platzer said, lifting it close to the camera and then, with two hands, tossing it off screen.

The cat squeaked as it was being thrown, and a thud could be heard.

One commissioner on the videoconference is seen putting his hands to his forehead and covering his eyes in response.

The meeting concluded 26 minutes later, but that was hardly the end of it.

On Monday, Mr. Platzer resigned from the commission, acquiescing to calls for his ouster by several city leaders, including the Vallejo mayor, Bob Sampayan. Robert McConnell, a City Council member and the liaison to the planning commission, also sought Mr. Platzer’s removal.


In a resignation email that a city spokeswoman provided to the news media, Mr. Platzer wrote that he no longer had the trust and backing of the City Council.

“We are all living in uncertain times and I certainly, like many of you, am adjusting to a new normalcy,” Mr. Platzer wrote. “I did not conduct myself in the Zoom meeting in a manner befitting of a planning commissioner and apologize for any harm I may have inflicted.”

Christina Lee, the spokeswoman for the city, which is about 30 miles north of San Francisco, condemned Mr. Platzer’s actions on Monday before receiving his resignation.


After the planning meeting adjourned, Mr. Platzer was heard using expletives, Ms. Lee said, adding that the mayor and Mr. McConnell discussed his behavior immediately after the episode and called for his removal within 48 hours.

Stephanie Bell, senior director of cruelty casework for People for the Ethical Treatment of Animals, said the group was prepared to place the cat “in an understanding, loving home” if Mr. Platzer’s “lack of patience or understanding” made cat guardianship inappropriate.

“The cats in our care rely on us for everything, including food, respect and affection, and no one should ever punish them for seeking our attention,” she said. “While cats are known for agility, this cat was thrown and could have slammed into furniture, the wall or the ground.”

Mr. Platzer, who could not be reached on Monday, was appointed to the volunteer position in August 2016, and his term was set to expire in June.

The Zoom episode was one of the latest to surface as officials adjust to remote working. In Florida, a judge this month admonished lawyers for getting too lax in their dress during their videoconference court appearances.

I will say that I suppose it's good that the world shutting down has held the total (tested) infections to about 3-3.25 million by the end of April. Without any mitigation, it would easily have hit the 10 million I predicted (and who knows what the actual number should have been in China if they had kept testing and reporting properly this whole time), and that would have meant easily 3x more deaths than the quarter of a million or so we're currently at.

Throwing money at researchers for a vaccine seems to have produced some hope. Forget about remdesivir and hydrochloroquine. They don't work.
Top

Well I for one, am glad your prediction fell short. No matter how hard you try to spin it.
Top

Even I couldn't have predicted how terribly the United States has done. Out of the three million counted infections, fully a third of them are in the United States. That's absolutely ridiculous.
Top

The US isn't doing that bad. You take NY & NJ out of the equation and I'd say we're doing better than most. but go ahead,, keep shitting on us

The US isn't doing that bad. You take NY & NJ out of the equation and I'd say we're doing better than most. but go ahead,, keep shitting on us

Where did this come from? I’m not shitting on Americans. It’s your psychotic asshat of a president that has utterly failed to deal with things even remotely adequately. The Greater Toronto and Greater Montreal areas are as populated as much of NY/NJ, so obviously their numbers are going to be high. What does this even have to do with anything? Ontario’s idiotic premier is a wannabe-Trump type... the only thing that has differentiated him at all in this is that he has mostly listened to experts.
Top

Researchers and analysts across the globe think the data suggests that the true number of infections is 10x higher than tested. So... 10 million in the US and maybe 30 million total.
Top

The Chilean government is begging for international pats on their back, because we've only had 216 deaths so far (!)

Oh, about the almost 900 deaths in excess of a 'normal' March? Naaaaah, must be pure coincidence. Just don't look at it.

It has been also confirmed just this week that the government wasn't including in their numbers those people with coronavirus but without symptoms. Because they don't reaaally count, when you think about it...

And it's also been widely reported that the requirement to get tested has gone beyond ridiculous in some medical care centres: you can go in with a cough, having some difficulty breathing, with a fever, but if you don't have a symptom involving your feet (I can't remember what was it specifically), they wouldn't test you for COVID-19.

Another confirmation that there's a huuuuuuge number of cases and deaths not being reported by the (fascist) Chilean government. The constitutional referendum with fought for during last year's final months was postponed for October due to the virus (which was highly convenient for the government), and when 4 days ago I got my calendar reminder saying "Referendum!" I felt a bit nostalgic. I'm sure they'll try to not have the vote in October either. This was always going to happen, virus or not.
Top

Yeah, we live in an age where data analysts will figure out pretty accurately what's being hidden by lack of testing.
Top

A new world order is most definitely afoot. I'm thinking more along the lines of Brave New World, and less of an Illuminati (consipiracy theories....)

I think the next 8 months are going to be most pivotal in our lifetimes for sure, and perhaps even in the last 200-300 years for this civilization we have concocted.... 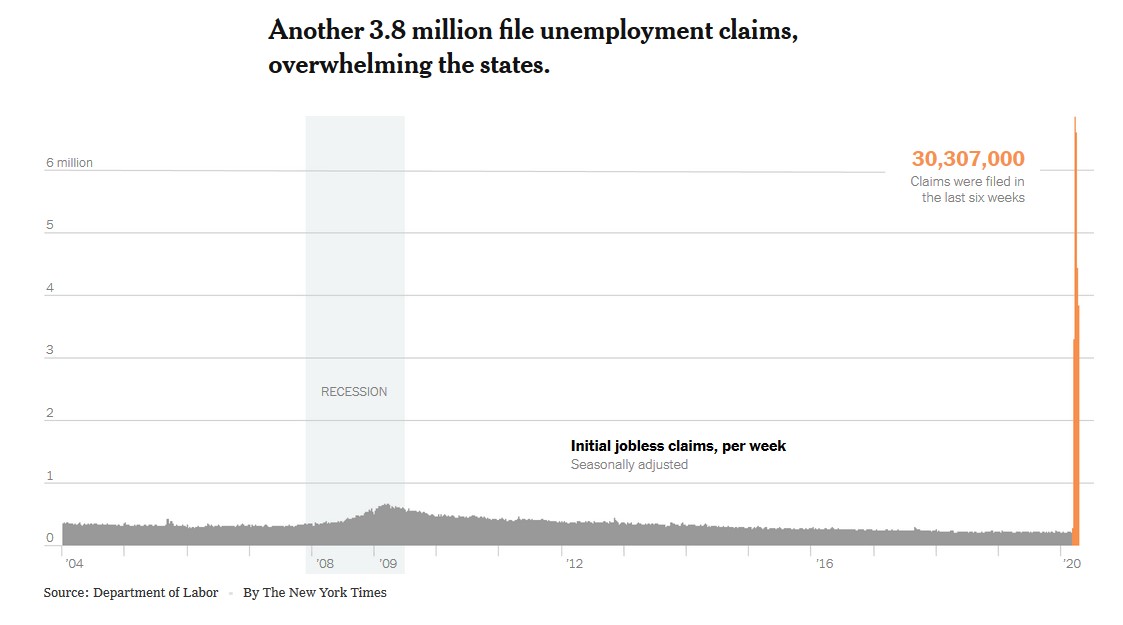 
The figures announced Thursday by the Labor Department bring the number of workers joining the official jobless ranks in the last six weeks to more than 30 million, and underscore just how dire economic conditions remain.

Many state agencies still find themselves overwhelmed by the flood of claims, leaving perhaps millions with dwindling resources to pay the rent or put food on the table.

If anything, according to many economists, the job losses may be far worse than government figures indicate. A study by the Economic Policy Institute found that roughly 50 percent more people than counted as filing claims in a recent four-week period may have qualified for benefits but were stymied in applying or did not even try because they found the process too formidable.

“The problem is even bigger than the data suggest,” said Elise Gould, a senior economist with the institute, a left-leaning research group. “We’re undercounting the economic pain.”


Consumer spending plunged in March but April could be worse.

Consumer spending collapsed in March as the coronavirus pandemic put millions of Americans out of work and forced tens of millions more to stay home instead of going out and spending.

Spending fell 7.5 percent from February, by far the biggest drop in the six decades that records have been kept, the Commerce Department said Thursday. The biggest previous decline was 2.1 percent in 1987. (Adjusted for inflation, spending fell 7.3 percent, also a record.)

Figures for April could be even worse. Layoffs and business closures did not hit until late March in many places, whereas nearly the whole country has been under some form of lockdown for most of April. Many forecasters think spending could fall at an annualized rate of 40 percent or more in the second quarter, even if some businesses begin to reopen in May and June.

With consumer activity responsible for more than two-thirds of the country’s economic performance, that would probably lead to the worst drop in economic output since World War II.

Incomes, too, fell in March, though not as sharply as spending. Overall personal income declined by 2 percent. Wage and salary income fell by 3.1 percent as layoffs and cuts in hours rippled through the economy. Business owners fared even worse; so-called proprietor’s income, derived from partnerships and other mostly small businesses, fell by 8.2 percent.

If Trump wasn't in power, and if someone younger and better than Biden were the Dem nominee, this would be an opportune moment in history to implement lasting corrections to the past 40 years of deregulation and tax-avoidance to pay for this damage.
Top

Hype wrote: ↑
Fri May 01, 2020 5:13 am
If Trump wasn't in power, and if someone younger and better than Biden were the Dem nominee, this would be an opportune moment in history to implement lasting corrections to the past 40 years of deregulation and tax-avoidance to pay for this damage.

Hype wrote: ↑
Fri May 01, 2020 5:13 am
If Trump wasn't in power, and if someone younger and better than Biden were the Dem nominee, this would be an opportune moment in history to implement lasting corrections to the past 40 years of deregulation and tax-avoidance to pay for this damage.

It is all fake.

It is currently being printed faster than the presses can keep up with, and the corporate $$$ is tied up in loony stocks.

Hype wrote: ↑
Thu Apr 30, 2020 4:52 am
Researchers and analysts across the globe think the data suggests that the true number of infections is 10x higher than tested. So... 10 million in the US and maybe 30 million total.

Which means the mortality rate is also much, much lower.
Top
Post Reply
705 posts