Oh Mick's a Leo I never knew that. Not that I believe in that stuff but some people take it very seriously. Happy birthday to your son SR, how old is he now? You buy him anything cool?
Top

Thx...not really, just some tix to rogan at the comedy store
Top

When I watched Fear Factor many years ago I thought Rogan was just a run of the mill pretty dumb car guy so when I a couple of years ago stumbled upon his podcast where he's discussing everything from politics to science and health and philosophy I was if not in shock then half way there.
Top

Yeah Joe Rogan has had a very successful career. Started out doing stand-up. Then he was on News Radio with the late great Phil Hartman. Fear Factor after that. He's mostly known to me for being color commentator of the UFC for the past fifteen years. Now he has a whole new audience who know him from his podcast.
Top

It's funny, sometimes Joe Rogan posts on twitter what he's eating followed by something like #healthyasfuck. It's always a huge pile of eggs. 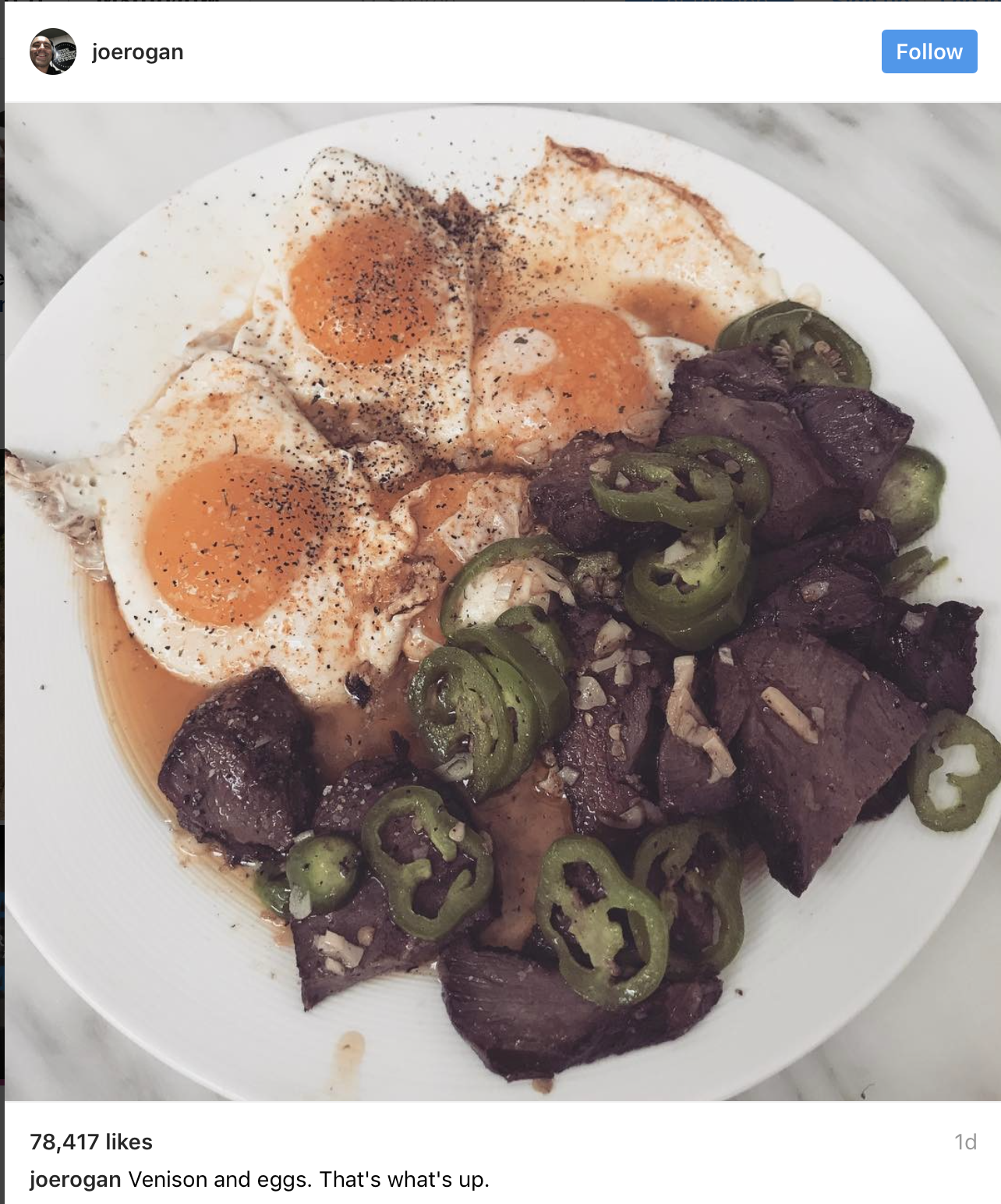 the eggs in the first pic are fuckin nasty, especially to a vegan like me...yikes. He's got all the money in the world wtf does he eat like that...
Top

Maybe he thinks eggs and shitty photos of them are funny. If he's serious, then he's even dumber than I thought.

I'm glad I decided not to spend $200 for a general admission, standing tickets at some field 90 minutes out of Toronto.

The Rolling Stones have been forced to postpone their entire North American tour as Mick Jagger needs medical treatment for an unspecified condition.

The rock legends issued a statement at 1pm today (30th March) confirming that they won’t be going ahead with the US and Canada leg of the No Filter Tour on doctor’s orders.

They wrote: “Unfortunately today the Rolling Stones have had to announce the postponement of their upcoming US / Canada tour dates - we apologise for any inconvenience this causes those who have tickets to shows but wish to reassure fans to hold onto these existing tickets, as they will be valid for the rescheduled dates, which will be announced shortly.

“Mick has been advised by doctors that he cannot go on tour at this time, as he needs medical treatment. The doctors have advised Mick that he is expected to make a complete recovery so that he can get back on stage as soon as possible.”

Unfortunately, as these legacy bands get past retirement age, it becomes a big role of the dice to commit to seeing them tour. It's troubling that it's Mick who's the issue this time around, he's incredibly fit for his age and they're not saying what his ailment is.
Top

Pandemonium wrote: ↑
Sat Mar 30, 2019 9:09 am
Unfortunately, as these legacy bands get past retirement age, it becomes a big role of the dice to commit to seeing them tour. It's troubling that it's Mick who's the issue this time around, he's incredibly fit for his age and they're not saying what his ailment is.

Whatever it is, it can't be too serious since the tour isn't cancelled. Mick is known for a very strict pre-tour fitness regimen.
It's amazing that those guys are still doing live shows. Charlie will be 78 in June, Mick&Keith turning 76 this year.
Top

It is being reported that he is going to have heart surgery.
Top

Rae Dawn Chong says she had sex with Mick Jagger at age 15
"He did nothing wrong. He didn't make me do anything I didn't want to do"


Actress Rae Dawn Chong has revealed that she had sexual relations with Mick Jagger in 1977, when she was 15 years old and he was 33. Chong divulged her relationship with The Rolling Stones frontman in a pair of interviews published on Sunday.

In an interview with The Hollywood Reporter discussing her career, Chong mentioned that her appearance in Mick Jagger’s video for “Just Another Night” led to her breakout role in 1985’s Commando. When asked how she knew Jagger, Chong “accidentally blurted out that I’d had sex with him when I was 15. It just slipped out.”

Chong later sought to clarify her comments in an interview with The Daily Mail. The actress maintained that their relationship was consensual and that Jagger was unaware of her age at the time.

“He never asked me how old I was and I never told him. It never came up. I remember thinking he was really cute. He had tousled hair. I thought, ‘Oh man, he is beautiful,'” she told The Daily Mail.

“He did nothing wrong. He didn’t make me do anything I didn’t want to do,” Chong added. “It was the 1970s, a different era. I wasn’t a victim. I don’t want him to get into trouble about this. It wasn’t traumatising. I knew what I was doing. I wasn’t an innocent schoolgirl. I always acted a lot older than I was. I was a grown-up at 15.”

Chong said she is only speaking about their relationship now because of her accidental slip-up in The Hollywood Reporter interview. “I feel incredibly bad about it. It’s me and my big mouth. My family and friends knew about it but it’s not something I have ever dined out on.’

“He’s probably going to lose his shit because I was a minor,” Chong said of Jagger’s potential reaction to her revelation. “He’s going to be so mad at me.”

Chong said she and Jagger had relations on two separate occasions, first after she was invited to a Rolling Stones recording session, and a second time after attending a Fleetwood Mac concert with Jagger. “I will tell you that it didn’t traumatize me, it wasn’t a #MeToo moment, it was something that empowered me, too,’ she commented.

“I could have said no, I wasn’t forced. I thought he was adorable and I was just new at the whole thing [sex] and he grabbed me and said ‘you’re it’. I wanted to be it.”

Following their brief fling in 1977, Chang said she later ran in Jagger at a party in 1983 where she asked if she could be in his next video. He obliged, leading to her appearance in the video “Just Another Night”.