So it appears U2 and their career-long manager Paul McGuiness are parting ways. Apparently McGuiness is semi-retiring as Live Nation is buying out Principle Management (for $30 million) and Madonna's manager Guy Oseary will be managing the band. McGuiness will have the title of "chairman" but will not be involved with the day to day duties of managing U2. Word is he will spend his retirement swimming in a Olympic size pool filled with cash.

U2 will supposedly release a new album (hopefully better than the last one) in April and tour arenas in North America before playing Europe, likely arenas and outdoor stadiums.
Top

Been revisiting the first 3 recently. Add Rattle N Hum to those and it represents all I've ever listened to from them. I love those albums
Top

new single from them that sucks

yeah...not a fan of that song. sounds like a coldplay song.
Top

Yup, pretty shitty song. No idea how they're going to put their act back together. Their last good song I can think of was from 2004.
Top

I don't think you have to go that far back, I like Magnificent a lot
Top

Yeah, it was one of my favorites when the album went out... but I don't think it stands the test of time. Plus, that song played live is quite boring.

I never understood why they ended most of their shows of that tour with Moment of Surrender. Talk about a buzz killer.
Top

I agree the new tune is pretty lame. Hopefully, it doesn't confirm they're out of gas which frankly all signs point towards being the case.

I think Atomic Bomb had a number of really strong tracks but the bad tracks were really bad (Yahwey, Man and Women, etc). I think "Sometimes You Can't Make It On Your Own" stands up with their best tunes. The last album, No Line On The Horizon I'd rank as their worst album. The title track and Moment Of Surrender are the only two songs worth anything off it and I agree with Larry it was a mistake to play MOS as a show closer.
Top

The new single. Sounds like a 2nd rate rehash of "City Of Blinding Lights." I guess this will be a bathroom break song for Larry as the cheesy drum machine loops does most of the work:

weird. the drums do ruin the song. not sure why they did that.
Top

I LMAO at this.

And this is why I've never understood the huge hate-on that some people have for Bono. I don't think he's a megalomaniac at all...he actually has always seemed pretty down to Earth (for a guy fronting the biggest band in the world) and with a great self deprecating sense of humour.

That was funny. I'm listening to some U2 right now, the '98 show in Chile. They were incredible.
Top

Tyler Durden wrote:And this is why I've never understood the huge hate-on that some people have for Bono. I don't think he's a megalomaniac at all...he actually has always seemed pretty down to Earth (for a guy fronting the biggest band in the world) and with a great self deprecating sense of humour.

I get some of it. From a simplistic POV, some people just resent being told by a bazillionaire rock star to donate or help some (humanitarian) cause in another country thinking "why can't Bono just feed all the starving Africans with his own millions?" It's clearly wrong, but at the 2005 Vertigo shows with a nearly 10 minute lecture by Bono about the One Campaign and especially the first leg of the 360 tour during the encore song "Walk On" when they had hundreds of fans on stage circling the pit wearing paper masks of Aung San Suu Kyi on their faces to protest her continued (at the time) house arrest in Burma was embarrassingly heavy handed and cringe-inducing.

But yeah, he seems like a pretty decent person, maybe a bit of a goof, but in an industry of assholes and criminals, he's one of the good guys.
Top

he seem like a fraud to me, but then again I'm no tax or Africa expert who knows

Matz wrote:he seem like a fraud to me, but then again I'm no tax or Africa expert who knows

Yeah, I forgot to mention the whole Ireland tax (avoidance) issue in relation to the band. I remember about 10 - 15 years ago U2 was going to build some sort of ritzy hotel with a roof top home and recording studio (housed in a smiley face egg, lol) for U2 that looked like Avengers Tower right in downtown Dublin to spearhead redevelopment and "create jobs," that boondogle never made it past the planning stages.

These guys seem to be cursed. Drummer Larry Mullin Jr's dad just died forcing Mullin to fly back to Ireland for the funeral with opening night of the tour tomorrow. The band said they will play the show but are mum on whether a substitute drummer (likely their drum tech) will fill in or not. What's clear is they did a long final rehearsal yesterday without Larry.
Top

That sucks, poor Larry. But it's normal, when you're ~60 people around you will start dying.
Top

They played their first show last night. Thanks to a guy using the Periscope app w/his cell phone, hundreds of us were able to watch the entire show in very good audio quality and so-so video quality. My opinion, the show is much better than I was expecting but there appears to be major kinks mostly in the setlist arrangements and a few song choices that will undoubtably be addressed in the next few shows. The setlist was kind of unique more for the regular multi-tour warhorse tunes left out (no "One," "Walk On," "Elevation," "New Years day," etc) and the number of songs played off the newest album The band, especially Bono seemed in good form, Edge's playing was a bit tentative at times and there was the usual number of flubs typical for a beginning of tour U2 production. The new production features the stage running the length of the arena floor with a huge pair of translucent video screens that the band play under on inside depending on whether it's suspended from the ceiling or lower to the stage like a curtain. This allows the band to play "inside" various video effects to often cool effect.

The running joke was Bono forgetting or skipping lyrics to just about every song in the set, including botching snippets of other band's songs. And, as I predicted when I saw the stage layout, I said they better have rails or someone's gonna take a fall and sure enough.....

Invisible
Even Better Than The Real Thing
Mysterious Ways / Burning Down The House (snippet) / Young Americans (snippet)
Desire (full band, similar to 1989 arrangement)
Sweetest Thing (acoustic, Bono on piano on last verse)
Every Breaking Wave
Bullet The Blue Sky
The Hands That Built America (snippet)
Pride (In The Name Of Love)
The Troubles
With Or Without You

Lucky Edge didn't break a flipper on that fall: 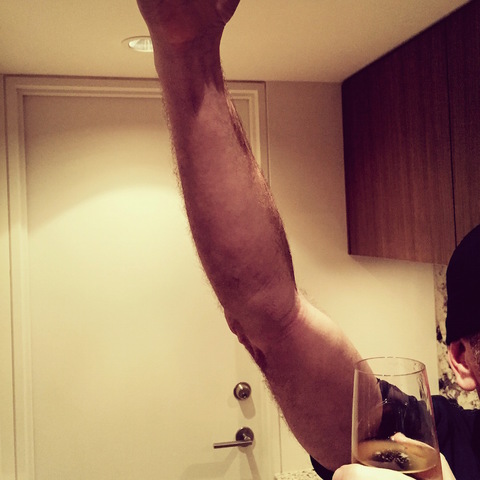