I thought someone here said Dave shaved his head....thought they meant clean off...or maybe he attached that rug again after doing that...or maybe..well ..fuck it...

He was bald when he played a couple songs with the Foo Fighters at the Forum almost exactly three months ago (go to the 5:21 minute mark):

He has a large, weird scar across the side of his head, maybe that's from past hair plugs.

BTW, Van Halen appeared on Ellen's show today and played a couple their more poppy tunes for the MILFs. Dave really likes his slip n' slide matt in front of the drum kit:

i didn't think there was anyone that acted goofier onstage than perry but i just watched the ellen clip. what an odd dude. he has crackhead mannerisms.

i also heard he got something like 14 stitches on his nose from the kimmel show.
Top

creep wrote:i didn't think there was anyone that acted goofier onstage than perry but i just watched the ellen clip. what an odd dude. he has crackhead mannerisms.

Yeah, I think he's one of the nuttier front man in a major band ever. His YouTube "Roth Show" is way the fuck out there. He apparently had or has ADHD and was hyper as a kid (dinner was called "monkey hour" because he was so out of control) and it seems to have gotten worse in the last 20 years if anything. No doubt decades of cocaine use hasn't helped.
Top

Give me a bottle of anything, and a glazed donut....to go.
Top

Did anyone else catch that the girl Dave brings up at BOTH Kimmel & Ellen is the same?

Not as spontaneous as it's supposed to seem, right?

fuck, is that the best Dave can do nowadays or was his voice particularly fucked right there?! sounds horrible
Top

DLR is unworthy of any comment, press, or notice......except he's fronting VH again. That was appalling.
Top

Eddie stuck his whole leg in his mouth during a new interview for Billboard. He basically rags on everyone he's ever worked with including his current frontman David Lee Roth. Lot of people thought the asshole behaviour was a thing of the past once he got sober in '07. The fact this is trending only a few weeks before the Summer tour starts, plus the tour is selling poorly doesn't bode well.

well, at least he didn't blame Hagar for his cancer..
Top

I was going to post that, Pandy. As you know, I'm not much of a VH fan...but I do pay attention to them. I never understood why they kicked Michael Anthony out of the band. He really was an integral part of the VH sound...and seemed like a very nice guy. I loved Sammy video response to Eddie's latest mudslinging.

Maybe Sammy didn't suit the band...but I still say he had the better voice...despite not being the "showman" that Roth was.
Top

Van Halen opened their Summer shed tour last night. The good - the setlist is a deep cut fan's wet dream, numerous songs that have either never been played before along with songs that at least haven't been played in decades. Some burnout tunes left out of the set including Pretty Woman. Band sounds solid as well. The bad - Dave continues to struggle with his vox. The tour is struggling to fill sheds, some places are barely 1/3rd sold only weeks before show dates. 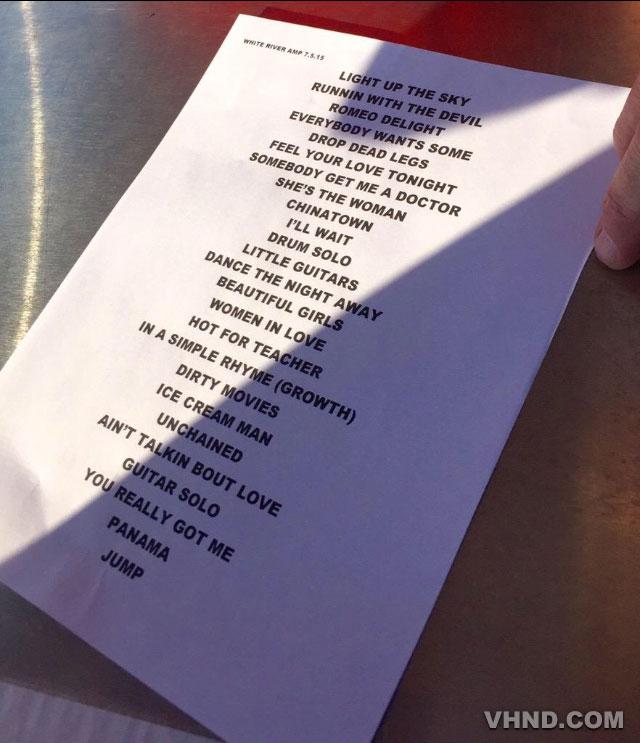 Dave can't sing for shit but he still has a sharp wit:

Pandemonium wrote:Dave can't sing for shit but he still has a sharp wit:

There is a new tsunami on PC culture that has arrived, helmed by college kids under the age of 25. They don't care for context...they just look for key words that they feel they should be automatically offended by. We're living in some weird times right now when it comes to the left and freedom of speech/thought.
Top

So like most shows I see anymore, I made a game time decision to go to the Irvine Meadows Van Halen show which is only 20 minutes south of me and lucked out and pulled a 4th row pit ticket almost dead center in front of the stage. Turned out to be a kick ass show all the better due to at least 4 people never showed in our row and the guy next to me left 2 or 3 times for like 3 songs apiece so the rest of us had plenty of elbow room between us, really nice. Perfect, warm Summer night, and the place seemed pretty full by showtime although they were offering free seat upgrades for people on the lawn and upper Terrace so it was far from sold out.

Only big downside was the sound where I was was a little dodgy. As the main PA rig is up about 30 on either side of the pit, the sound up front in the pit comes more from what the band is using onstage. And lemme tell you, Eddie's son Wolfgang plays really loud and it made the mix in our position pretty bass heavy knocking Eddie's guitar down in prominence. When I moved out of the pit and the end for the 3 song encore and went about halfway up the Orchestra section, the sound was much more balanced on the mid and hi-end. Outdoor shed shows are always kind of crappy for decent concert sound, imo.

The first 4 or 4 songs into the set, the band was just incredible. Opener "Light Up The Sky" was far superior on the song versus any YouTube clips I've seen from the tour and Dave was spot on aside from not going for any '80's era screams. This tour, they're playing a decent number of rare deep cuts and leaving off some burnout tunes like "Pretty Woman" which is kind of cool. They're really one tour away from doing the "play the whole classic album" shtick and I don't think they'll be playing arenas anymore if the sales from this tour are any indication.

Overall, Dave seems to be singing drastically better than most of the clips I bothered to watch from the first couple shows this month. Very few times Dave went for that horrible post-Y2K testicle crushed pigsqueal, he really kept it in a sane range. The only time he kind of lost it was Dance The Night Away (which had a LONG Dave rap that killed the song), Little Guitars (which vocally by the whole band was not very good) and a maybe couple other songs in the latter half of the show. Probably my biggest bitch was Dave taking several really long rambling talking breaks in the middle of certain songs that really don't need those kind of 5 minute talk-fests. Dave certainly talks and mugs a *lot* more this show inbetween and during songs ("Ice Cream Man" was brutal) than any time I can ever recall. Dave can be really funny, but he can also be really obnoxious and cheesy and doesn't seem to have an internal filter to know when to shut up and sing. But to Dave's credit, he's singing better in his narrow range than the last tour and he pulls all the songs off without a teleprompter unlike most bands these days, something he was proud to point out during "Little Guitars."

But all is not chained to Dave's crash dive to talk show hell. The first half hour of the show was super tight, no bullshit Van Halen at their best. Of the deep cuts, Drop Dead Legs and Dirty Movies are jaw droppingly good. Eddie is actually playing as good as his classic days if not breaking any new ground at this point in his career.

As for how the band interacts on stage, yeah it's Eddie off in his own zone playing with his brother and son while Dave does his shtick. Dave's slip n' slip mat takes up the whole area almost to the lip of the stage in front of the drum kit and Wolfgang and Eddie are careful not to step on it and thus, are pretty much stuck to their sides of the stage which is kind of odd. It's like a big square "Do Not Step" area center stage. Dave will go to or talk to Eddie or Wolf once in a while but you can tell there's little real connection between the band and Dave. While Dave would sometimes get a chuckle out of Eddie, occasionally I could see Eddie rolling his eyes at one of Daves dumb jokes or goofy soft shoe/jazz hands stage moves. And there were a few times where Dave was insistently motioning the band to keep on vamping while Dave dragged out one of his mid-song babbles.

All said, best show I've seen them play since Roth got back with the band in '07.
Top

I always enjoy reading your reviews. Thanks for taking the time to do it.
Top

I thought this short clip was pretty cool. In it, backstage before the Irvine show, Roth goes through the crew and personally thanks them individually for their hard work:

Not sure if this has been posted before or not. Anyway, here it is...