What is going on at Fort Hood?

What is going on at Fort Hood?

Since March, six soldiers (5 men, 1 woman) have been found dead near the base in what appears to be five separate incidents of foul play. (One of the men killed himself after having killed the woman.)

A soldier assigned to Fort Hood who was missing was probably found dead on Tuesday, his family’s attorney said, adding to the toll of soldiers at the Texas installation who have vanished or died in recent months.

Sgt. Elder Fernandes, 23, was last seen Aug. 17 by members of his unit at a home in Killeen, outside the sprawling base, the Army said. His family later arrived in Texas from Massachusetts to aid in the search.

Fernandes previously reported an “incident of abusive sexual contact” that is being investigated, said Lt. Col. Chris Brautigam, a spokesman for the 1st Cavalry Division. Army officials said Fernandes may have left on his own accord after speaking with soldiers in his unit.

Fernandes’s family said the circumstances were suspicious. Fernandes was hospitalized at Fort Hood from Aug. 11 to Aug. 17, his family said, the last day he was seen, and they grew concerned when he did not make a phone call he promised to his mother. His blue BMW was found at his unit parking lot, his family said.

Army officials called the Fernandes family on Tuesday evening and asked to meet in person, family attorney Natalie Khawam said. Army officials told them a body was found hanging in a tree in Temple, about 30 miles east of the base. A black backpack at the scene contained a military ID card and a driver’s license that belonged to the soldier, Khawam said.

The Temple Police Department said the IDs indicate the remains may belong to Fernandes but “no forensic confirmation has been made at this time.” The initial investigation has not found evidence of foul play, the department said.

Khawam is also the attorney for the family of Spc. Vanessa Guillén, a soldier who went missing from Fort Hood in April and whose remains were discovered in June.

“One of our worst nightmares again has happened,” said Khawam, who is representing the Fernandes and Guillén families pro bono. “One of our own, Sgt. Elder Fernandes, was found dead after reporting sexual assault at Fort Hood.”

The Fernandes family chastised the Army’s investigation in a Tuesday call with The Washington Post, hours before they received word of the discovered remains.
“Somebody cannot just vanish from the face of the Earth like this. Somebody knows something,” said Isabel Fernandes, an aunt of the missing soldier. “We can’t sleep, we can’t eat. This is beyond cruelty.”

Fort Hood has experienced several soldiers this year who have vanished or have been killed.

Investigators said a fellow soldier killed Guillén on Fort Hood and buried her remains in a shallow grave. Police confronted him on July 1, and he fatally shot himself, investigators said.

The remains of Pvt. Gregory Wedel-Morales, a soldier missing since August 2019, were found in a field in Killeen outside the installation last month. Pfc. Brandon Rosecrans was killed in nearby Harker Heights in May, and Spc. Freddy Delacruz was killed in Killeen in March.

Five suspected homicides of soldiers at Fort Hood between March and June has outpaced the last four years combined, Stars and Stripes reported. Army data has shown more violent and nonviolent crimes occur among soldiers at Fort Hood than at Fort Bragg in North Carolina, which hosts thousands more troops.

Khawam said striking similarities to the Guillén case have appeared. Like the Guillén family, she said, the Fernandes family has felt dismissed, that commanders displayed a lack of urgency and little information has trickled down from officials.

A friend who knows Fernandes told Khawam that the soldier was being harassed and hazed within the unit. Brautigam, the 1st Cavalry Division spokesman, said Fernandes was transferred to another unit to avoid reprisals from superiors.

“These men and women go through a lot,” Khawam said. “I’m not talking about war here. It’s toxic command.”
Army officials said the search for Fernandes was a “top priority” of the 1st Cavalry Division, with soldiers searching for him on and off Fort Hood and with Killeen police also investigating.

But the family said the Army took too long to get the public involved. A news release was published four days after Fernandes was last seen.
“The Army goes online, posting they helped since day one,” Isabel Fernandes said. “It’s all bull—t.”

On July 30, under intense scrutiny after the Guillén slaying, the Army convened an independent panel to review the command climate at the base.

Fernandes, a chemical, biological, radiological and nuclear specialist, was born in Cape Verde, a string of islands in the Atlantic west of Senegal. He arrived in the United States as a 10-year-old, his family said.

Friendly, and family-focused, he had plans to reenlist in the Army when he visited family for Christmas, his aunt said, but did not reveal any problems with his command.

“He’s a giver. He will put his life on the line to protect others,” Isabel Fernandes said. “He wanted to do something positive for this country.”

It's Killeen which means they're probably doing some dirty shit off base, a lot of meth in that city, a lot of other drugs, and not much else to do.
Top 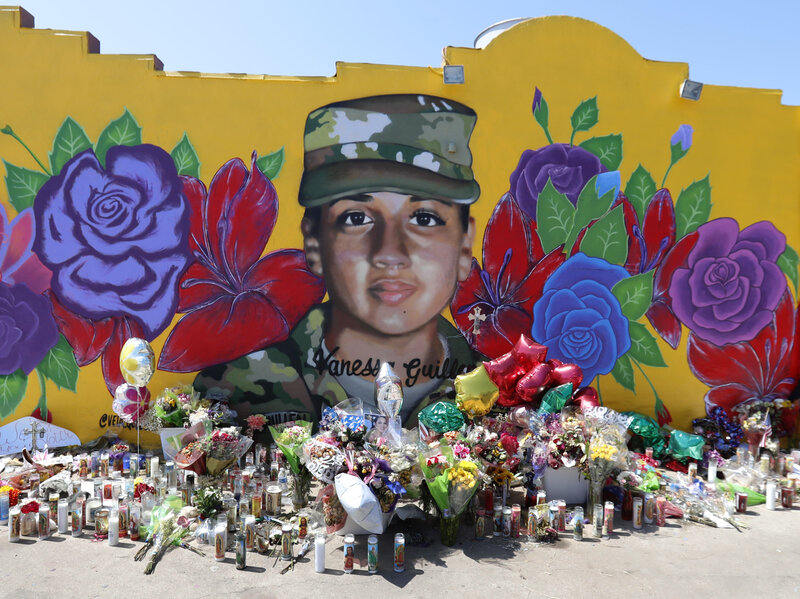 A mural of slain Army Spc. Vanessa Guillén in the south side of Fort Worth, Texas. The Army says it will expand its inquiry into the killing of Guillén, who is one of a string of disappearances and deaths at the Texas post.
LM Otero/AP

The Army has removed Maj. Gen. Scott Efflandt from his post as Fort Hood's senior commander, a week after another soldier from the base was found dead. The Army also says it will expand its inquiry into the killing of Spc. Vanessa Guillén, who is one of a string of disappearances and deaths at the Texas post.

The change in command at Fort Hood had been previously scheduled, the Army says. But it adds that Efflandt will not go on to command the 1st Armored Division and Fort Bliss as the service had planned. Instead, the Army says he will remain at Fort Hood, which will be commanded by Maj. Gen. John B. Richardson IV.

The most recent reported fatality from Fort Hood was Sgt. Elder Fernandes, who had been missing for about a week when his remains were found last week in Temple, roughly 30 miles from the base. Attorney Natalie Khawam, who is working with Guillén's and Fernandes' families, said last week that Fernandes' body was found hanging in a tree near railroad tracks. Police said there was no indication of foul play.

At least nine people stationed at the massive military base in Killeen have been found dead under unusual or suspicious circumstances this year.

"This year at Fort Hood, there have been about 28 soldiers total who have died at the installation, which isn't abnormal for other years. However, the manner in which they've died is what's drawing attention," reporter Rose Thayer of Stars and Stripes recently told NPR.

Both Guillén and Fernandes had said they were sexually assaulted or harassed at Fort Hood. Fernandes formally reported abuse; Guillén's family says she told them she was being harassed before she disappeared.

The Texas Senate Hispanic Caucus is calling for a congressional investigation into the post, noting that "more than one-third of women at Fort Hood said they were sexually harassed" in an Army review earlier this summer.

As it announced the move to replace Efflandt, the Army also appointed Gen. John Murray, commanding general of Army Futures Command, to lead "an in-depth investigation" into actions and decisions related to Guillén, going up the chain of command.

Multiple official reviews or inquiries into Fort Hood are underway. Murray will roll those efforts into one higher-profile investigation, the Army says.

His work will remain separate from an independent review of Fort Hood that began in August, the Army says.

I watched what the army did to my father (including kill him off early due to agent orange exposure). It's absolutely disgusting what happens to so many of those that serve.
Top
Post Reply
5 posts • Page 1 of 1